Shellfish and shellfishing have played an important role in Madison's history. A legislative act of 1790 delineated the shellfishing grounds between what are now Madison and Clinton. In 1829, the Selectmen designated a committee to oversee the laying down of oysters in waters of Long Island Sound and its tributaries. Since 1952 the Town has had a Shellfish Commission with broad responsibility and authority over the shellfish resources in Madison waters.

Madison waters support the growth of the eastern oyster, hard clam (Quahog), soft clam (Steamer) and blue mussel as well as other bivalves. Oysters grow particularly well in the protected and less salty rivers of Madison such as the East, Neck and Hammonasset River and Fence and Tom's Creek. Hard clams are found in protected bays and estuaries in Long Island Sound where the bottom is hard and sandy. Soft Clams are found in intertidal flats in soft, sandy bottoms. Mussels are attached to rocks and other firm substrates, such as pilings. Connecticut oysters are shipped around the world and there have been reports of the words "Madison Oysters" on menus in San Francisco seafood restaurants.

Oysters, clams and mussels are filter feeders. This means that they filter the water that passes by them and extract food from this water. Due of this non-selective feeding technique, any contaminants that are in the water are also consumed by these animals and can accumulate in the animals' bodies. Common contaminants that are of concern include bacteria, viruses, heavy metals and PCBs. These contaminants concentrate in the shellfish and can make them unsafe to eat. For this reason, shellfishing waters must be very clean to allow harvesting and direct consumption by humans. Fortunately, this filter feeding mechanism can be used to cleanse shellfish that have grown in dirty water, by placing them in clean water for a few weeks. The contaminants will flush out of the shellfish, making them again safe to eat.

Madison has an active Shellfish Management Program that is operated by the Madison Shellfish Commission with assistance from the Madison Health Department. This management program involves issuing leases and permits to commercial shellfishermen to harvest oysters and clams from Madison waters. An accurate inventory of the level of productivity of the shellfish grounds in town is obtained from this harvesting, and the grounds are maintained in good condition for the long-term propagation of shellfish.

An added benefit of this commercial activity is the Town's recreational program, in which numerous bushels of oysters and/or clams are placed in accessible recreational areas for residents to harvest.

The open/closed status of shellfishing areas in Madison depends on many factors including rainfall, the condition of the beds, the ability of the Shellfish Commission to take regular water samples and the results of the tests.

Water samples are obtained in Long Island Sound off Madison and Madison rivers throughout the year and analyzed for the presence of bacteria, to ensure the purity of these waters for the growth and harvest of shellfish. Failing septic systems, birds, dogs and other domestic and natural activities can contribute large numbers of bacteria to these water bodies, rendering them unsuitable for shellfishing. Any improvement in water quality due to the elimination or reduction of these sources will enlarge the shellfishing opportunities in town.

Questions not addressed here can be directed to Trent Joseph, Director of Health at 203-245-5681 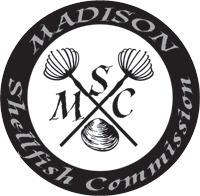